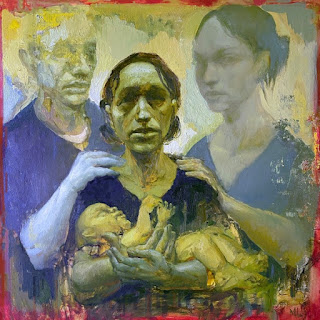 Whilst I've been planning out which albums I want to review to keep me busy as the world continues to stand still, this is one I didn't initially plan to work on until I gave it a listen after a friendly recommendation and felt it was worth talking about as in depth as I could.

Truthfully whilst 2020 has been a shitty year overall, it's also been a pretty meh year for album releases as well. By this time last year I had a good idea of how my top albums of the year was looking, but this year it's pretty much slim pickings and part of the blame lays squarely on myself as I've lost a ton of motivation to listen to new releases with the stress of the lockdown taking over until now where I'm trying to listen to as much as I can.

Thankfully this album came along and it's the first album to give me similar feelings I had with my pick for album of the year for 2019 with Swallow the Sun's latest release as this was one of the first this year to get any real emotion out of me in a similar vein. This is the first time I've actually checked out Pallbearer, an American doom metal band bringing out their fourth studio album: Forgotten Days. Hell, I've even bought the vinyl already.

They have dropped a bit of their doomy sound as while there is a doom core here for the most part, the band does add elements of prog and even a bit of grunge to their sound as they feel almost like a cross between Electric Wizard and Mastodon at times. This is one of those albums that's meant for late night listening with rain softly hitting the windows whilst you read the lyrics at the same time to really have the proper effect. It's far from a chill album and yet still has a smooth as hell feel to it all.

The album starts off strong with the title track and already we have a pretty emotional track with the lyrics describing a person slowly being overtaken with dementia as their mind fades away to nothingness. As in similar fashion to the rest of the album, the clean vocals mix well with the heavier instrumental sections which does bring that Mastodon comparison. It's definitely one of the doomier tracks on here without ever going a repetitive route and keeping things fresh through it's near 7 minute runtime. The band likes to add in melodic guitar sections and it's usual a real standout moment when they hit out of nowhere. Great opener to set the tone.

"Riverbed" is a great follow up track as well with nice little guitar solo at the start to set it apart from the previous track. As the song goes in I did adore the quiet atmospheric moment before the big chorus hit to really emphasis the sheer size of it. There's also some great vocal work with vocalist Brett Campbell hitting the high notes in impressive fashion. Doesn't hurt to have some chunky riffs in there too.

The biggest highlight for me though was easily 'Silver Wings' which is the longest track on the album by far with it going over 12 minutes and didn't waste a second of it. It just built and built as it went on and the last few minutes with only instrumentals I can only describe as breath-taking with some fantastic, emotional guitar work pulled off here to give me goosebumps every time I hear it and the orchestral backing definitely helps as well. Trust me when I say this is one you should check out.

Another of my favourites on here was the album closer "Caledonia" (thankfully not a cover) as I can't help but have a bit of Scottish pride here with the title. It almost starts like it's gonna be a massive power ballad and it's a bit of a relief that it never does as this is one of the doomiest tracks on offer and adds a bit of grunge to it's slower riffs as well. The bass does have a chance to show off here in the quieter moments. A very different track to the rest of the album and a great way to close it in my opinion.

Overall this is a pretty damn great album with no real low points for me at all with every track bringing something to the table whether it be the doomy closer or the one-two punch of "Quicksand of Existing" and "Vengeance & Ruination" bringing the fire after a 12 minute epic, it always had me interested and for a doom album over 50 minutes long I'd say that's impressive. The only skippable track I found was maybe "Stasis" but even then it's not a bad track at all, just doesn't hit as hard as the others.

It's definitely one that demands more that one listen to catch things you missed the first time around whether it be the subtle bass work woven throughout or the orchestral moments that arrive when needed most. It's an easy recommendation from me and one I'm sure that will pop up in my year end list.

Tracks to check out: Forgotten Days, Silver Wings, The Quicksand of Existing, Caledonia