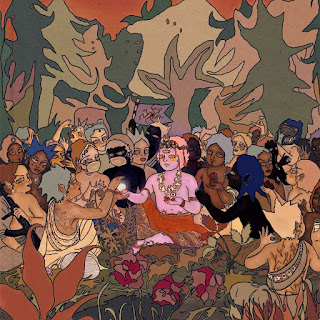 For anyone that's read any of my reviews for the past year or so with my many reviews for black and death metal, it might come as a surprise that I consider myself a fan of Bring Me The Horizon (I'm sure the metal elitists will be hammering on my front door in no time), or at least I used to be.

I consider 2015's 'That's the Spirit' to be one of my favourite albums of all time and I even have quite an emotional connection to it, to the point where I even have the umbrella from the front cover tattooed on my left arm and I considered every album from 'Suicide Season' onwards to be a masterpiece in their own right. That was until March of last year when I took to reviewing the band's latest LP 'amo'. I'll leave a link here for anyone wanting to check it out: amo review

Long story short, I had mixed feelings on the album as it did go for much more mainstream and pop sound mixed in with the hard rock they'd been using on 'That's the Spirit' and it didn't always hit the way I wanted. I've mellowed out on the album since then and whilst I still need to skip a fair few tracks I don't enjoy, I still get a kick out of listening to it again and again.

With this EP released on October 30th, I didn't even plan on listening to it nevermind reviewing it as I was worried about further disappointment with their musical evolution. Curiosity eventually got the better of me and I decided to check it out and HOLY SHIT I'm glad I did. This is EP has totally turned be back into a fan of the band and I've spent the last while binging their albums again. So just how good is it? Well let's take a look.

Right from the start I was pretty much hooked with the opener 'Dear Diary' which might be the band's heaviest track since the days of "There is a Hell" and whilst it's a short one, there's so much about it I love. The sheer ferocity of Oli's vocals (the scream is back!) along with a near death metal level of fury including a soaring guitar solo and even a catchy chorus it does so much in it's short time. There's even a killer breakdown at the end. The EP could have ended here and I would have been happy. I also love the lyrics as it's obvious that survival horror games were an influence with some of the words even taken right from passages from the very first Resident Evil game which I did enjoy as a fan, and this mixing with the claustrophobia of being stuck in lockdown works perfectly. Phenomenal start.

Next up we have one of the first singles with 'Parasite Eve' that came out all the way back in June and was pretty much a sign of things to come. This was the first hint that the band may be going back to a heavier sound whilst keeping intact their evolution by including electronics. There's even a choir at the beginning making me think of the Japanese survival horror games 'Fatal Frame' keeping that theme going. Hell, the song's even named after a survival horror game itself. Anyway this is a song that may end up being divisive but I dig the hell out of it with another catchy as hell chorus and provides a bit of elation for the lockdown period. Although with the lyric "When we forget the infection, will we remember the lesson", I can confirm that no we will not. Too many dumbasses on this planet.

Next track was 'Teardrops' and before I'd even heard this song, I'd heard people comparing it to Linkin Park so I wasn't sure what to expect. Turns out I didn't have anything to worry about as it does sound like Linkin Park but more like Linkin Park in between 'Hybrid Theory' and 'Meteora' so that's all good in my book with the more melodic moments mixing very well with the heavier sections. The track is all about how the current generation is becoming more addicted to technology and even some references to Oli Syke's battle with depression leading to some emotional vocals from him that really kept me hooked. Another winner as this EP is on a role so far.

'Obey' is next and I have no idea who 'Yungblud' is as he's a vocalist guest featuring on this track. He did well enough here even though I have no desire to actually find out anymore about him. This was another single released and references oppression and corruption from current governments. Don't worry Oli, Trump is out now so now we just need rid of the Tories and we're all good to go. I have to ask where all this attitude was on 'amo' though. It was sorely missed. Another big banger of a track with another massive chorus that I'd love to hear in a live setting but we're still a while off from that.

"Itch for the Cure" (another Linkin Park reference?) works as a nice intro to what might just be the best track on the album: "Kingslayer". This track also features work from Babymetal and whilst I've never really been into them myself, after listening to this I'm tempted to give them another go. This track is just completely mental and almost goes full cheese at points but manages to hold back. Those electronics mixed with those massive riffs just go together so well and Oli's heavy, growling vocals mixing with the innocent vocals of Babymetal was hilariously awesome. Bring Me almost went full power metal and it was a wonder to behold. I need to hear this on a dance floor at some point in the future.

'1x1' featuring the Nova Twins (?) and 'Ludens' are the next tracks but this is when I started to come down on the album just a tad. '1x1' is a fine track with yet another good chorus but it can't really match or follow some of the tracks that came before. 'Ludens' I'd already heard back when it was released as a tracks for the Playstation 4 game 'Death Stranding' and I wasn't a big fan of it. I like it a bit more now after a few listens but in my opinion it only really becomes interesting in it's last couple of minutes when the heavier guitars kick in. It's a decent rock track.

Thankfully the EP ends on a high note with the huge name of 'One Day the Only Butterflies Left Will Be in Your Chest as You March Towards Your Death' which features the very talented Amy Lee from Evanescence. This might be the only proper ballad Bring Me have ever recorded and Amy's vocals do bring a level of class to the track and Oli's vocals work well and he isn't overshadowed of Amy at all. A nice different track from the band and whilst I think it was missing a big spine-tingling moment you would hope for in a track like this, it was still damn good while it lasted and built to a lovely crescendo.

My biggest argument against 'amo' was that the band was trying too hard and too much to sound different from their past selves, but here they've kept true to their older sound whilst embracing new ideas that enhance their sound in many places. Whilst not every track was an absolute killer, there was plenty to enjoy here and I can only hope their next full length album is as good as this. I'm so happy to say that Bring Me The Horizon are back and as good as they've been in years. This is the nicest surprise 2020 has hit me with so far.