Album review: Hellripper - The Affair of the Poisons 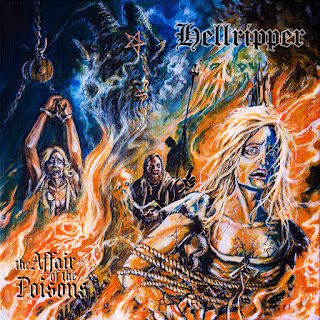 It’s been a while hasn’t it? I had planned on taking a break from writing whilst the world of gigs remains in flux and the world of new music remains a tad stale with a much lower output of releases due to the bastard known as Covid-19, but since there’s pretty much fuck all to do around here now, I decided that to keep my spirits up, I needed to keep talking about my favourite thing: heavy fucking metal.

I’m gonna try and do as many new releases as I possibly can to highlight bands that I think deserve it with releases from this year and maybe even some nostalgic ones here and there to keep things fresh. To start with I think I found a new possible contender for my favourite album of the year…..

Hellripper is a blackened thrash metal band (my two favourite genres rolled into one, YAY!!) from the Scottish Highlands and amazingly is pretty much orchestrated by one guy in James McBain in a similar vein to America’s blackened rockers Midnight. Affair of the Poisons is the second full length release from the band after their 2017 debut Coagulating Darkness.

This is the first time I’ve checked the band out after a recommendation and I’m glad I decided to lie in bed at midnight listening to it at full blast when I had nothing better to do. Not in a bad way, but this isn’t an album I can really go in depth with as I would end up repeating myself quite a bit. It’s not a repetitive album at all but the band sticks to what they know throughout the quick 29 minute runtime without too many changes, not that I was asking for any because this stuff rattled my damn brain in the best way.

For an idea of the sound, imagine Metallica’s 1983 classic Kill ‘Em All but with an extreme and satanic edge to it with vocals sounding like a young, possessed by a demon James Hetfield as he snarls out the lyrics like a goddamn monster. The sound is defiitely influenced by early 80s thrash and speed metal especially with tracks like the brilliant ‘Vampire’s Grave’ that sounds like a mixed Motorhead and Metallica track thrown into a black metal blender.

I feel like the band knew there would be comparisons to Kill ‘Em All and threw in some throwbacks like the opening riff to ‘Spectres of the Blood Moon Sabbath’ which would fit on that album perfectly, and the shout of “alright!” at the opening of Vampire’s Grave sounds just like James Hetfield before ‘Seek and Destroy’ really kicks in.

I do love the opening title track as well with an almost deliberately slow pace to open with to lull the listener into a false sense of security before exploding into high speed thrash without ever really taking their foot off the peddle for the rest of the record and I’m happy that’s the case. Whilst there isn’t a bad track on here at all some more of the highlights do come towards the end of the album like the fantastically titled ‘Blood Orgy of the She Devils’ with a twin guitar solo that would make Iron Maiden jealous and a catchy chorus to boot. I also love the final track ‘The Hanging Tree’ which comes the closest to feeling like core black metal before we hit the one minute mark and the thrash comes again to send us home happy and even gives us a nice melodic outro out of nowhere for a proper full stop.

Overall I loved this album as it’s a great throwback to the glory days of early thrash whilst managing to keep a fresh sound that makes way for a bright future. It helps that the album is only 29 minutes so never outstays it’s welcome at all and can be played over and over again to keep the adrenaline going. This is an album that begs to be played live and I can only hope I get the chance to in the future. Check them out for sure.