Ross's Album Reviews - Swallow the Sun: When a Shadow is Forced Into the Light 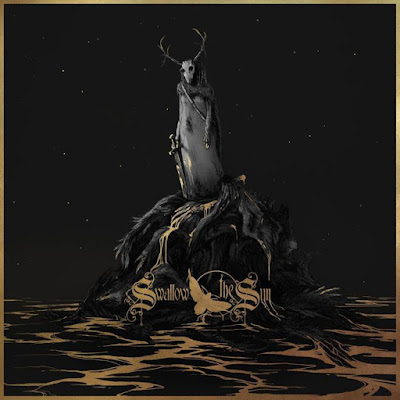 Well this here is my first foray into doing a review for a full album. I've done many movie reviews and a few game reviews in the past (cheap plug for www.rosscosreviews.co.uk if you want to read them) so this is a little daunting as I want to do the material justice.

If this is shit, I apologise but I'm hoping I'll get a proper grasp of the concept once I've had a bit of experience with it. Anyway enough about me and onto the music.

First a little background on the band. Swallow the Sun are a Finnish band and I want to say that their style is melodic doom metal but I can't vouch for their previous records as I haven't actually heard them.

This album is their seventh studio album since their formation in the year 2000 and was released by Century Media Records just over three years after a titanic triple album known as Songs from the North I, II, & III which I do plan to power through at some point.

This is my first experience with Swallow the Sun as I only really discovered this album after seeing that the band had been announced for the Bloodstock festival in August and I wanted to check them out since I'm going there. I have to say that I made a great decision in starting with this album.

Sadly, three years before this album's release, guitarist Juha Raivio lost his life partner and Trees of Eternity bandmate Aleah Starbridge to cancer. In the time after her death he formed a new band known as No Stars Upon the Bridge with lyrics based on poetry she had written.

I mention this because it does feel like the grief that Juha still held was poured into practically every song here and it almost comes across as a tribute to her memory as well as some catharsis for the guitarist.

The album kicks off with the title track and in my opinion it was definitely the best choice to start things off as it immediately lets you know what you're in for in the remaining 45 minutes of the album. The song is 7:27 in total and does not drag at all for a longer song with a nice mix of slow, almost Sabbath-like riffs before seamlessly shifting to acoustic guitar with clean vocals before hitting us right in the chest with a booming chorus with growling vocals that could fit on any black metal album and yet still completely understandable. Easily one of the best songs on here and we're just getting started.

I also really like the addition of a background female vocalist as it almost feels like Aleah is there in spirit and it really complements Mikko's vocals when appropriately used. It really feels like all the emotions are coming out here and the 'Shadows' coming into the light represents the grief from Aleah's passing coming out to us on this record.

Next up is The Crimson Crown and is the longest song on the album 7:57 and while I would I would have preferred a shorter song after the first one was already that length, it's still not a bad place to have it on the record. The song definitely has a more melodic, folky feel to it and the bass gets more of a chance to shine in the quieter moments. The female vocalist returns as well for some enchanting duets with Mikko. I was even getting some hints of Iron Maiden with some of the softer guitar picking before the volume is turned up again. I'm a sucker for a good guitar solo and there's a spine-tingling one as we near the end.

While I prefer the first song, this is still a song worth checking out and the near 8 minutes passes by in a flash.

Up next is Firelights and is one of the shortest songs on the album at 5:41 and is one of my favourites. It starts with a haunting melody that sticks with you even after the song is over. It can be quite chilling to listen to, especially when we reach the backing vocals whispering 'The phantoms, the nightmares' before hitting a chorus that may be destined to be a live favourite as it's so easy to sing along to and will get stuck in your head. This is the first song that brings up a constant theme of the album in the form of 'water' or 'drowning' which I do think ties into the theme of grief as Juha is being dragged down to the depths by his emotions. The female vocalist and black metal style of singing are used sparingly and to good effect.

Track 4 on the album is Upon the Water and seems to be the album favourite according to the Spotify download numbers but it's not hard to see why. This is yet another album highlight for sure. The song starts with a lovely dual guitar riff before switching a very melodic verse. Another big chorus is here and it's one I'd imagine sounds terrific live, especially if the harsher vocals are on point. Another one that hits all the emotional high points as well with more lyrical choices that seem to point towards the passing of Aleah such as 'Low tide is gone forever' and 'I want you to bury me'. Strong stuff.

Next up is Stone Wings and wouldn't you know it we have another fantastic song. You can tell that the band has found a great formula here with many quieter moments leading to a big loud chorus to really get your blood pumping. It's reminiscent of the Blackwater Park days of Opeth. This might be the best big chorus on the entire record which is saying a lot.

It might be the most melodic song here and yet also still has perhaps the heaviest moment on the album with a bridge that has lyrics that feel like they came from a death metal album while also mixing in the earlier harsher vocals. Best song on the album for my money and the one to really check out to see if you like this.

Next up is Clouds on your Side and is the shortest song on the album at 4:47 and it might be my least favourite song on the album, but is still a good song showing just how great this record is. While the formula is getting slightly repetitive with the softer verses, another memorable chorus is more than enough for me to also recommend this.

The penultimate track is Here on the Black Earth. This is one of the more emotional songs on the album as you really feel Juha's heart breaking here and some of the lyrics break my own heart listening to it.

Very powerful words that stayed with me. I also can't help but fall in love with another great little guitar solo. Another album highlight after a slight disappointment in the previous track.

And that leads us to the final gut punch on this journey in the form of Never Left. Ending where we started off, this is one of the longer songs at 7:50 and easily the most powerful song on here. Through the lyrics you get a sense that Juha is questioning his reason for going on without anything to fight for. The song ends on a sad note:

If you've lost someone close to you, this song is a hard one to get through, nevermind the rest of the album. While the title track was the perfect opener, this is the perfect ending and I couldn't imagine any other song being placed here. Just pure beauty here.

It may seem obvious that I'm in total love with this album and it's so true. I can see this easily making it to the top of 'Best of 2019' list when I eventually get there and I'd recommend this to anyone looking for something with some real heart to it and one that will require a couple of listens to really get the full effect.

While it's just barely a 'metal' album due to a lot of softer moments, there's enough here to keep even the most ardent metal fan invested. Hell I listen to a daily dose of Cannibal Corpse, Behemoth and Anaal Nathrakh and I still found this to be a beautiful album worth listening to over and over again. Give it a try.