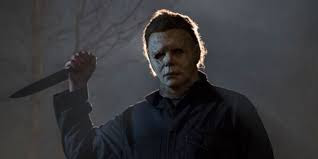 This movie is special to me. Weirdly it's only after watching it the first time that I realised this. Everyone that knows me knows how much of a horror movie fanatic I am and how obsessive I can be over some of my favourites in the genre.

I don't think I would have any of that if it weren't for Michael Myers. The first Halloween movie I watched was Halloween: Resurrection when I was pretty young (probably around 9 or 10 years) and while that's a terrible edition to start with, I was hooked and couldn't get enough of it.

From there I've seen just about every other movie in the series and I've never had that fanboy obsession outside of the 1978 original. So really it's over half my life I've been waiting for a proper sequel that the characters involved with the original deserve. I may have just gotten my wish.

No spoilers. And for clarity, I've already seen this twice and own the awesome soundtrack on vinyl.

So for anyone new to this, this movie takes place 40 years after the events of the 1978 classic and ignores every single sequel or remake since then which I absolutely love.

We start off in the psychiatric institution in which Myers has been held prisoner for the last 40 years since being captured after the massacre of 1978. Two Brits are there to make a podcast discussing the events of the massacre and they try to get a response out of Michael, and even bring out his old mask. It doesn't go well.

On the other side of the coin we have Laurie Strode whose role is reprised by the always lovely Jamie Lee Curtis. She is the survivor of the original massacre and those events have stuck with her as she's now a total survivalist, even going so far as to spend her daughter's early years training her self defence and how to use a gun, leading to social services taking her away.

It really puts a proper impact on the events of the first movie to see just how badly the killings affected the lives of so many. In fact you could totally watch the first movie and then put this on straight after as they go together so well.

During a transfer to a new institution, the bus crashes and Michael Myers is free once again, leaving the poor little town of Haddonfield to experience some major deja vu as more killings are afoot. The Shape has returned. 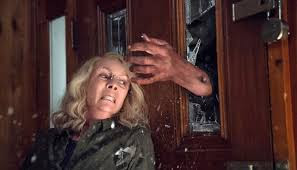 This is classic Michael Myers and the one we've needed for some time. He isn't just some brute that storms around in a rampage killing people. He's a stalker that sticks to the shadows and patiently waits for his opportunity to strike. He's the image of pure evil. He has no reason to go around killing other than it's all he knows, or maybe it's just instinct. You can never tell with him. He's the classic monster that isn't some supernatural ghost or demon that we've needed in pop culture for quite some time.

His kills start off quite simply, but as the movie goes on they do tend to get a bit gorier, and the faint of heart may have to look away at certain points.

It's not too scary either as it does rely on a couple of cheap jumpscares, but Myers does get his fair share of shit your pants moments like a scene featuring a motion tracker that'll stick with me for some time. There is also one scene towards the end of the movie that just never seems to end and it continually builds the tension higher and higher until you have to cover your eyes out of sheer fear. I loved it.

Jamie Lee Curtis almost steals the show herself and I daresay that she was Oscar worthy at certain points. Just seeing her as a gun toting badass preparing for the arrival of the devil himself was so much fun to watch and really gave a proper new dynamic to the character. It's almost a revenge movie in a way.

There's some fun homages to the original movie without totally ripping it off. Kind of like The Force Awakens. This movie was made for the fans in the best way possible. The soundtrack is fantastic as well as it was worked on by John Carpenter and features updated versions of the classic themes from the original that I can't get enough of.

This whole movie is a love letter to classic slasher horror and I feel like it's a movie the horror genre has needed for quite a while. We've been relying too much on the supernatural to scare us, and this movie showed that the horrors of humanity can be enough to scare the daylights out of you. You might not feel safe in your home for a while.

Overall I could go on and on about what I love here but quite a bit of that features spoilers so I'll stop here. I loved this movie and as a fan of the horror genre and of Michael Myers in general, I heartily approve of everything here. This is going down as an October classic and it's one I plan on watching every Halloween from now on, along with the original.

Definitely check this out. You won't regret it.