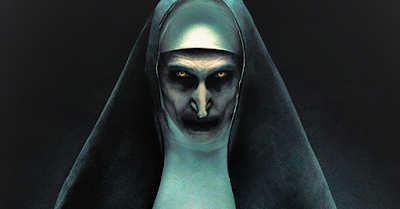 Hey an actual movie in the cinema for me to review! That's a first. I know this one's a bit late but I only got a chance to see it the other night after deciding to brave it alone.

This is the fifth entry into the Conjuring series and while I love those two movies, the spinoffs have been pretty hit or miss with 2014's Annabelle being highly disappointing and 2017's Annabelle being surprisingly good.

The Nun definitely showed potential as we didn't get to see much of her in Conjuring 2 and whenever we did it was a highlight. So did the movie live up to expectations? Let's take a look.

No major spoilers and make sure to check out the Chew Bubblegum and Kick Ass page on Facebook where you can find the latest podcast that also takes a look into this movie. Definitely worth a listen.

So the movie starts off in an Abbey in Romania where two nuns appear to be looking into a potential demon in the bowels of the building. It's unleashed and one of the nuns dealing with it decides to commit suicide rather than face it.

The Vatican hears of this and decides to send Father Burke and Sister Irene (the future Lorraine Warren) to investigate why this occurred and to see if the Abbey can still be considered holy. And we now have our horror movie set up.

First off I have to note it's a bit of genius casting to have Vera Farmiga's younger sister Taissa cast as Sister Irene as she genuinely does look like a younger version of Lorraine and plays the part well.

We also meet a local villager near the Abbey who is known as Frenchie and is probably the most memorable character in the whole thing due to being the only comedic character around. 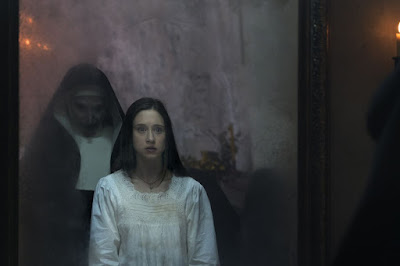 So remember how the first Annabelle movie was just a bunch a jumpscares thrown into a piss thin plot in order to capitalise on the popularity of the demon? This is basically the exact same deal here. Although I do put this one just slightly higher than Annabelle for a few reasons but not by much.

I mean for a movie titled 'The Nun' she barely makes any appearances here aside from the disappointing climax and some sections in the middle of the movie but that's about it which is a shame because the character is awesome and I wanted more of her.

The rest of the time it's just her undead minions that seem to be trying for the scares, including a little boy known as Daniel from Father Burke's past who decides to make a couple of appearances but he's really not that scary and the story goes nowhere. Burke just seems to forget about him as if he's nothing.

Without spoiling it, I did enjoy the backstory of how the demon known as Valak came into our world and formed the blasphemous image of a nun as it does explain how such an evil monster could come into this world.

The scares are pretty awful as they go for the obvious jumpscares that just get annoying after a while with so many scenes involving the camera panning back and you know that there's going to be something there to jump at you every single time. The other Conjuring movies did this way better.

There is one scene that I found creepy involving Frenchie in a graveyard as it turns out that zombie nuns are just as scary as demon-possessed nuns but this is the only creepy scene that stuck out to me.

I can't fault the actors performances in this as it does feel like they're trying even with the obstacle of a stunted script. I think Frenchie is the only one that knows he's in a dumb movie and just hams it up when he can and I thank him for that.

Speaking of Frenchie though, the movie does try for some comedy moments almost in the vein of what you would hear in a modern Marvel movie, but it does it at the weirdest times like another scene involving the zombie nun which should come across as frightning but just ends up being funny due to a Frenchie punchline. It can be kind of off putting when the movie is trying to be scary and funny at the same time.

While the ending was disappointing, it did tie into the future Conjuring movies in a way I enjoyed and does explain quite a bit about The Nun.

Overall this was a pretty bland movie that had it's moments but did disappoint overall especially with an interesting premise like this one. Hopefully we see the Nun again and like Annabelle, the sequel will be way better. Other than that, there's way better movies out there that can scare you. Some of which I may be reviewing soon.....