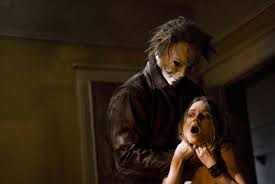 So the new Halloween movie is coming out in about a month so I thought I'd take a look at some (hopefully all) of the movies in the series. Well the ones featuring Myers at least.

This one is the first remake of the series and is directed by Rob Zombie who has not been one of my favourite directors to be honest.

I'm not even sure if this got a good reception when it came out, so I thought I'd check it out to see how it holds up.

Also I reviewed the very first Halloween a while back so take a look: http://www.rosscosreviews.co.uk/2017/10/rosss-reviews-halloween-1978.html

The very first movie started with Michael killing his older sister. This movie starts just a bit before that because this time we have more of a character study than we've ever had for Myers before.

Straight away it's obvious that this aims to look more at the childhood that turned Michael into the devil we all know in love.

At home he has to deal with an asshole of a sister, a dirty home, his mom's abusive boyfriend and is made fun of by the other kids at school for the fact that his mom is also a stripper. It does a good job trying to make him more sympathetic for the most part even if he himself does just seem like an evil little fucker.

Of course his emotions take a dive off a cliff on Halloween night and he decides to kill everyone in his house that night.

It's at this point in the original where we move straight to Halloween night where Michael returns to continue his murderous rampage, but here we stay with him while he's still a child and going through therapy sessions to find out why he became a killer. We don't actually get to the point where he becomes the true Shape until almost an hour into the movie.

I think this was a complaint amongst fans as they wanted to get straight to classic Michael Myers killing people, but this movie takes its time and in my opinion it's all the better for it. You get a good chance to know the real character who still just seems like any normal young boy, whose mental state starts to slowly decay the more he's kept out of the public.

Here we also have Dr Loomis played by the brilliant Malcolm McDowell and we have a slight twist on his classic character. While he does act like the kind therapist throughout, it appears that he's milking the whole situation by releasing a book and using his sessions with Michael to make money. 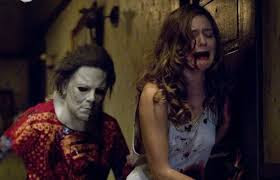 A couple of annoying Rob Zombie tropes make an appearance as well, such as making so many characters come across as horrible people to the point that it just becomes an irritant. For example when he attempts to kill his older sister, this should come off as intense but because his sister has been as asshole the whole time, I didn't really mind seeing her biting the dust.

Zombie also uses his trope of characters using unnecessarily shocking dialogue to try and get a reaction out of the viewer. I mean the Halloween story is already pretty shocking enough as it is so I'm not sure why this needed.

Once we do eventually get to the return to Haddonfield as expected, this movie does get surprisingly fun. We get some homages to the original with scenes like Laurie thinking she sees Michael outside her school staring at her, only for him to just vanish. There's also moments where you can just see him standing in the background, watching and waiting, and it is pretty creepy.

Without spoiling anything it does follow a close blueprint of the Carpenter classic, but it takes a slightly different route and stands out on its own because of this. While it's not totally frightening it does have a couple of decent jumpscares and you may not feel safe in your own house for a little while. Remember to check behind those doors....

Surprisingly I had a lot of fun with this and this is honestly one of the better horror remakes I've seen as it kept the original film in it's heart while doing it's own thing. Not to mention that it did a good job of fleshing out the Myers character and bringing back the classic monster.

I'd recommend giving it a look.