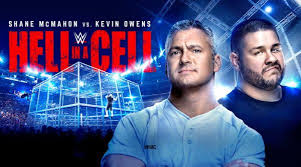 Thought I'd take a look at each HIAC show leading up to this year's edition. Once I'm done with the PPV shows I'll also rate every other Cell match there's ever been.

I can see why I didn't remember much about this show as it starts off with a bang and a WWE Match of the Year contender with the Tag Title cell match, but it totally takes a dive after that.

There's nothing worth seeing with Orton and Rusev putting on a match that would barely be Smackdown worthy and Baron Corbin drags down what could have been a great triple threat with his boring offense.

The Women's Title match had potential up to a crappy DQ finish making it seem more like a TV match.

Jinder Mahal's terrible reign continues and this really brought down Nakamura's worth quite a bit. Thankfully it didn't last much longer after this.

Roode's PPV debut was a complete misfire as the crowd didn't care and he doesn't have a character to get behind.

Thankfully Shane did save things a bit by being absolutely mental as usual but the match was a bit overlong for what it was going for.

Overall a pretty bleh show. Watch the first match then skip to the last match.
Posted by rossd971 at 11:45