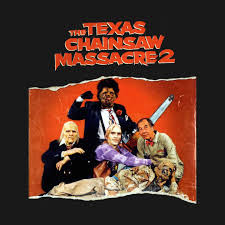 This is a weird ass movie. Like really weird. It was released in 1986, twelve years after the first movie in the series came out. I have no idea why it took so long as it was even directed by Tobe Hooper, director of the original.

After researching the film a bit, it makes more sense as Tobe had apparently originally intended for the first movie to be considered more of a black comedy rather than a horror (how in the name of cthulhu, that was meant to comedic I'll never know), and took his opportunity at another movie to get his original intentions on the screen. You could never tell that this was directed by the same person.

The story also takes place about 12 years after the original as the Sawyer family have disappeared after the police went searching for them after testimony from the lone survivor of the first movie. Even with their disappearance, occasional chainsaw related crimes still pop up around Texas but no culprit has ever been found.

The movie starts with two nameless assholes on some road trip who are obviously intended to be completely unlikable to the point where you want to see them meet their end. Eventually they do at the hands of a returning Leatherface and their death is heard over the radio as they were on the phone to a rock request station at their time of death.

The knowledge of this recording leads Lt Boude (Dennis Hopper) on a trail to catch the murderers of his niece and nephew 12 years prior. We also meet DJ Stretch who I guess you can say is our main character as she gets the most screen time.

First off, while Dennis Hopper isn't in this often, he is a complete highlight as his performance goes so over the top at one point that you can't help but laugh at his antics. Caroline Williams as Stretch is also fun to watch as she makes for a good scream queen. 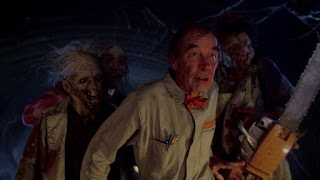 Most of the original Sawyer family make their returns aside from Leatherface who is played by Bill Johnson this time rather than Gunner Hansen. They even have Bill Moseley as the hitchhiker's twin brother since he met his demise in the first one. They've been hammed up to heaven and back as even they somehow manage to be more over the top this time around.

Jim Siedow returning as the family patriarch, Drayton Sawyer, and I'll admit that he even got a few laughs out of me. All of this does seem to be at the expense of poor Leatherface. He looks sillier than ever and is a major step down from the iconic, horrifying original. Even the way he moves and reacts is made to be more comedic and it's almost sad to watch. He's not even a proper villain here as Stretch tries to seduce him and make friends to survive.

Weirdly enough, this movie is still gory and has some hard to watch moments which does mix up the tone a bit as it definitely brings down any comedic value they were going for. There's one point that seems to be set up for a laugh, but considering that it involves someone's skinned face, it really doesn't get the reaction it wants.

Another disappointment is the face that the last act is almost an exact reenactment of the last act of the original, just nowhere near as disturbing and doesn't make sense as the grandpa returns, is apparently 137 years old, and can somehow be even more mobile than he was before.

This is such a strange movie as I want to like it as it does have some really entertaining moments (and one really good jumpscare that actually got me) but there's just a little too much going against it. While the silliness can be funny, it can be a bit too goofy for it's own good and at times it doesn't seem to know what it really wants to be.

In terms of enjoyment I'd put this up with the 2003 remake in a case of it being a movie you're gonna love, hate, or just forget about after some time like any generic slasher. In my case, it's the latter for me and gets a slight recommendation for anyone that wants a funny movie with a slice of gore added in. Anyone that's a big fan of the original should probably stay far away, lest it ruin your memories of a classic.