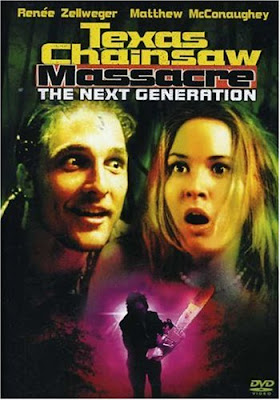 It's finally over. No more Texas Chainsaw related movies until a new one is released. After this I think I'm done with sticking with one particular franchise unless absolutely necessary, and boy am I glad did I keep this one for last. Do my Chainsaw reviews end with a bang or a whimper? Let's take a look.

Like the previous sequel, this one only really makes mention of the 1974 original movie as part of the opening credits and makes sure to leave out the last two movies.

We start with the end of a high school prom as some drama unfolds between some teens and four of them end up driving back home together, but after a nasty road collision, they end up in some mysterious woodland.

This all happens within the first five minutes of the movie and is as rushed as you can imagine as we don't get any time to meet our 'heroes' aside from the fact that the one called Barry who's a complete cock and I got so sick of him so quickly.

We also surprisingly have Renee Zellweger of all people in the main role which I believe is her first proper movie role that wasn't just aired on TV. God knows how she had a career after this though as her performance really wasn't that great. It might just be because compared to most of her cast mates she may as well have been Meryl Streep.

I won't even mention the other two as there's nothing worth talking about. 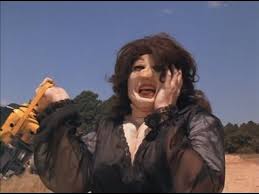 And now we get to Leatherface. Oh poor Leatherface. I've made fun of some his appearances in the past for being too goofy but this is just absolute rock bottom for the poor guy. I mean the first time you see him he just looks like a guy wearing a cheap Halloween costume put together at the last second and just screams all the time. And it's not a scary or creepy scream, it's a fucking annoying scream that grates my ears everytime I hear it.

Not only that, but after he at least acts like a normal Leatherface for the first part of the film, for the rest of it he's just a total bitch and whines and can be put down by being shouted at! A low point for a horror icon indeed.

Even the fucked up family is just worse this time around and they tried to give it a weird organised cult feeling to spice it up a little but it just didn't work because it doesn't make sense. They even make their surname Slaughter. What lazy bullshit is that? The whole movie just comes across as bad student film quality and it makes me wonder who thought any of this was a good idea.

Although we do have one bright spot and his name is Matthew McConaughey. He plays the family leader Vilmer and is a cold blooded killer. Like Zellweger this is also his first proper movie role and he just absolutely kills it here. It feels like he's the only one here who gave a damn and really just goes for it with his performance.

He's absolutely nuts and just so believable that he ends up becoming the most memorable part of the movie by far.

Still though, one great performance can't excuse the rest of this as, similar to some of the other movies in the series, it just tries to copy what's already been done way better before and just fails in every way at it.

There's really no reason at all for this movie to exist and does for the Chainsaw franchise other than dragging it down further into an early grave.

Terrible movie and honestly one of the worst I've ever had to sit down and watch. Thank god it lasts less than 90 minutes.