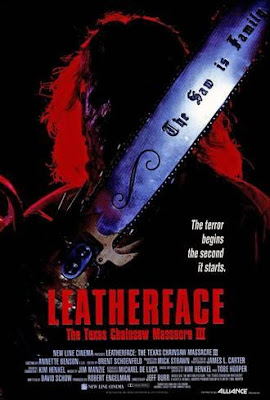 Thankfully there's only one more movie after this one to go as I'm starting to get tired of this series and want to move onto something different.

This is the first movie in the series not to be directed by Tobe Hooper, this time directed by Jeff Burr with such gems to his name as Puppet Masters 4 & 5, and Mil Mascaras vs The Aztec Mummy (how is that one even a thing?)

Instead of the weird black comedy direction of the film that came before this, they seem to have opted to go back to a straight up horror which appears to be the right idea. So how does this one hold up with the rest of the franchise? Let's take a look.

No major spoilers here. Also just want to give another shout out to the awesome Chew Bubblegum and Kick Ass page I write for that I would recommend to any movie fans and even fans of wrestling. Also check out what I'm doing in between reviews on my twitter page where you can follow me @rossd9711.

First off the movie starts off a credit sequence explaining what happened in the very first movie, and seems to have glossed over the events of Massacre 2 which is most likely for the best otherwise the tone of the movie could have drastically changed.

The movie follows a couple called Michelle and Ryan (they may have relationship issues but that's never really brought up) as they make their way across Texas to deliver their car to Michelle's dad. Intriguing plot. They make their way to a gas station and come across Tex, played by the always awesome Viggo Mortensen, at his gas station where there's also a creepy guy that decides to try and shoot the couple.

They come across some car trouble and that's where they meet Leatherface for the first time. I think this Leatherface, played here by R. A. Mihailoff, is much better than the previous one as he's way more of a badass than a the wimp he was before and just seems intent on killing everything in sight.

He still has a leg brace in a nice bit of continuity from the first movie after he accidentally tore it up with his own chainsaw. Although speaking of continuity, the rest of Leatherface's family seems to be made up of entirely different characters from the previous movies aside from grandpa (see pictured below) and it's never really explained where these guys came from or if they've just always been part of the same family. 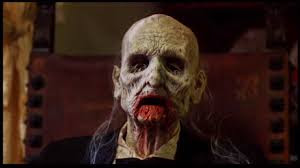 This time there's even a little girl who's never named, but she's definitely one the creepier aspects of the movie and I give credit to the young actress who played her as she really goes for it here even if she's not in it much.

The film isn't as gory as the second instalment but I preferred this as it wasn't too over the top and worked for this kind of film.

Also making an appearance is Ken Foree as survivalist Benny. Ken has a huge filmography to his name including a ton of horror movies, most notably as Peter in the original Dawn of the Dead. He actually might have been my favourite character here as he was the only one tough enough to go toe to toe with Leatherface on more than one occasion. He's also the one smartest enough to bring a gun to a chainsaw fight.

I know I haven't mentioned our main couple but that's because there's not much to them and they do bring down the first half of the movie as it mostly features them and they were pretty boring when it was just the two of them. Ryan, played by William Butler, was particularly annoying as he was just there to whine and complain the whole time.

Michelle does get a little better as the film goes on mind you as her character starts to go a little crazy and just doesn't give a fuck after seeing some of the horrors that the Sawyer family has to offer.

As for the rest of the film it's just a run of the mill copy of the original with a lot of the same kind of scenes you would expect in one of these films and just really comes across as another generic slasher. While Massacre 2 might have been weird, at least it had it's own identity and gives me a reason to want to watch it again, while this one just kind of plods along until the more interesting horror scenes and doesn't give me a reason to want to experience it again.

This is a bit of a shorter review than normal but that's just because I don't have much to say about it. There's not much I can actually recommend unless you just want to say you've seen the entire series. It's not terrible by any means, but it's not good enough to warrant any interest. Overall it gets a big fat meh from me.