Now this'll be a fun one. I thought over the next couple of game reviews I'd take a look at one of the more popular horror series of the modern era in Outlast before I move onto more familiar surroundings in a particular fog filled town.

I was going to keep the first game and DLC reviews separate but I'd forgotten how short the DLC actually is so I figured it was easier to make one big review as it's technically all the same game anyway.

So this was one a lot of people have claimed to be one of the scariest of all time especially around the time of release, but does it still hold almost five years later? Let's take a look.

No major spoilers, and again please check out the awesome Chew Bubblegum and Kick Ass page on Facebook where I post all my reviews, and also check out my twitter @rossd9711 for updates on what I'm working on.

Let's begin. Also I've played this game on PS4 and Xbox One and both versions were as good as each other, although I imagine PC is the best place to play.

It makes sense to start with the first game so we'll go there. You play as freelance investigative journalist called Miles Upshur who has received a tip from the inside of Mount Massive Asylum that inhumane experiments are taking place inside the Asylum and he heads up alone to investigate. The place is run by the Murkoff Corporation and their ethics have always been questionable and their experiments here need to be shown to the world.

As you make your way through the dark hallways your mission quickly goes from investigating goings on to escaping the madhouse before you're slaughtered by the many crazed inhabitants that are dead set on beating you to death.

It becomes clear that something bad happened here, as the inmates are all over the place, there's blood on the floor, some of the inmates are petrified, and it isn't long before you come across a room filled with dead bodies and severed heads, with a near death soldier telling you that you need to get out before you meet the same gory fate.

And if that wasn't enough, you also run into an ex-soldier named Chris Walker who also has his eyes set on tearing your throat from your neck for most of the game. He's huge and your only hope is to run away and hide and pray that he doesn't find you.

This also goes for all the other enemies in the game as you can only run and hide to escape from them to complete your objectives and progress. It can lead to some intensely creepy moments, like trying to activate the power down in the basement and moving around in the darkness while trying to avoid a dangerous inmate, as you constantly find yourself hiding in lockers and behind any object you can find. If you are of a nervous disposition you may find this game almost impossible to get through as it filled with many moments like this. 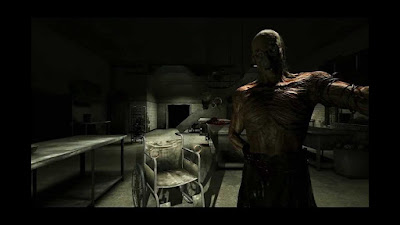 Making the atmosphere even more unpleasant is the presence of your camera which acts as your light source as it has a night vision mode to help you see in the complete darkness, but there's just something to the realism of it that just leaves you feeling uneasy whenever it's on and the fact that the battery life doesn't last very long doesn't help.

Having the camera on while hiding under a bed from a threat is heart pounding, and I found myself pausing the game if I was ever caught over the fright it gave me. The game surprisingly isn't as gory as I expected but it does have it's moments (especially Whistleblower which we'll get to soon) and if you're not a fan of penises then you're going to have a bad time as there are two, surprisingly intelligent and well-spoken, inmates that try to kill you and don't mind doing so with all their glory blowing in the wind.

Now pictured above is a motherfucker known as Doctor Trager and this guy is an asshole of the highest order. He traps you in his sanctum and he just likes to fuck with you. He's almost super sane rather than simply insane and he's an enemy you have to be clever around as he can catch you quite easily. He also doesn't mind talking shit while chasing you so he can just fuck right off.

Now we'll move onto the Whistleblower DLC which was released a short time after the main game had been released and takes place around the same time. This time you're playing as Waylon Park, a software engineer for the Murkoff Corporation, and the Whistleblower (there it is!) that originally sent the email for investigation to Miles Upshur, but is caught by the company and becomes part of an experiment as a result.

Of course, the inmates are now loose and you need to find your way to freedom and back to your family. Like I said earlier this additional content is very short as I finished it in around a couple of hours so there isn't as much to talk about.

As well as encountering some of the previous enemies from the original game, there are some new additions here and somehow they are even more unsettling and dangerous. First off you have a crazed cannibal that you encounter while he's eating a security guard and then decides he loves you and wants your flesh for his next meal. The worst thing about him is that he also carries a saw that you can hear in the distance and it really makes you fearful to move from room to room. 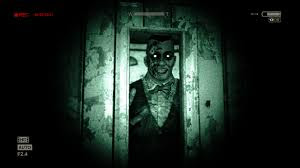 And then you have this fucker that's somehow even worse than Trager! His name is Eddie Gluskin or "The Groom" as he's more affectionately known. I don't think I've ever been more disturbed being chased by an enemy especially while he doesn't think he's doing anything wrong and calls you Darling.

It's when you find out what he really does to other inmates when you see just how sadistic and out of his mind he really is. He's looking for the perfect partner and since there only seems to be other men around, he has resorted to castration (with anaesthetic I might add) leading to some horrifically gory visuals that could have you turning off the game altogether. I love it.

Unfortunately your next on his list and he has a massive saw heading straight for your genitals. He's also of the thought that men can reproduce with other men and claims many times that he's looking to plant his seed for children of his own. It's gloriously fucked up and will have you begging for escape.

Overall these games are a ton of fun but can be horrifically intense and scary for the uninitiated so caution is advised if you are of a weak heart. If you love horror though, this'll be right up your alley, mixing more realistic encounters with the supernatural. Play this if you haven't already and if you haven't tried the sequel...... well we'll get onto that soon enough.