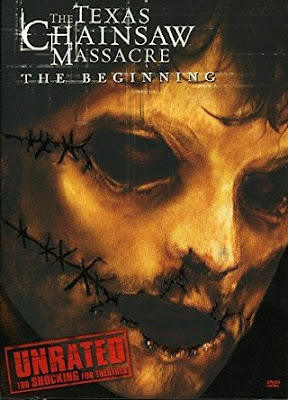 Yes I'm continuing with this series and at this point I'm pretty sure I've watched all the good ones so I wish myself good luck. Also I'm pretty sure this is the unrated version I watched but we'll get to that a little later.

This movie came out in 2006 as a prequel to the 2003 remake after it made a surprising amount of money at the box office. This one aims to show how the demented Hewitt family got their start in terrorising anyone they came across.

I was interested in this one as, just like the 2003 remake, I've seen a few people praise it and yet it's one I watched years ago and can't remember anything about it. So let's take a look and see how well this prequel holds up.

By the way, I'm an admin for the Facebook page Chew Bubblegum and Kick Ass where all my reviews go and you can also find awesome podcasts and movie news with a particular focus to horror. Check it out.

The story starts off in a meat factory in 1939 as a pregnant woman suddenly starts going into labour on the factory floor and gives birth to our favourite psychopath: Leatherface. Tragically his mother dies in childbirth (in a pretty grotesque scene may I add) and the thoughtless factory owner just decides to toss the baby into the trash.

In there, he's found by Luda Mae Hewitt, who takes him back to part of the Hewitt family. Around 30 years pass and everyone has left this part of the country as the work has dried up with the slaughterhouse closing for business and leaving only a few people left. It turns out Thomas Hewitt (Leatherface) works at the slaughterhouse his mother died in and doesn't take the news of his mother dying too well.

Thankfully we have R. Lee Ermey returning as Sheriff Hoyt and once again he steals the show from everyone else as he's just so sadistic and crazy that you can't help but love him. He's also in this movie way more than he was in the previous one and the experience is all the better for it.

In fact every cast member that played a part of the Hewitt family returns here and they're all pretty great at what they do, including Andrew Bryniarski as Leatherface. After this, I think he's my favourite Leatherface as he's just such a hulking figure, he just has a presence to him. In this movie they do try and humanise him a bit more, coming across as an outcast misunderstood and bullied by society that has been led astray by his adopted family into killing relentlessly. 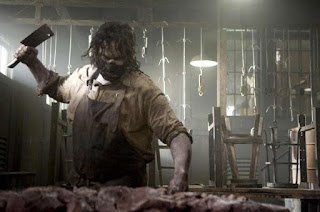 While this goes on we also have our group of victims who are a much bigger improvement on the victims in the previous movie as I actually liked them and didn't want to see them get hurt which is a major change. There's a more interesting dynamic as we have two brothers on their way to be drafted for the war in Vietnam with their girlfriends in tow.

The only problem with this is that the younger brother, Dean, doesn't agree with the war and doesn't want to go and instead plans to run off to Mexico with his girl, Bailey. He's just trying to find a way to tell his older brother, Eric, who believes it's their family destiny to fight for their country. We also have Jordana Brewster of Fast and Furious fame, as Chrissie.

The great thing is, no one here is annoying. They just seem like four regular people having to deal with an issue before they unfortunately end up in hell. There are two biker characters that show up but to be honest they didn't really add much for me and just felt like a bit of filler for the main story. Thankfully they don't hang around too long.

The gore here has definitely ramped up from the 2003 remake and I'll admit, I loved it. Lets just say there's one scene in particular that'll have you looking away. Skin peeling is not fun at all.

From this point, it's Chrissie trying to rescue her friends from the clutches of the demented Hewitt family leading to some very tense scenes and moments as you really do hope they can pull it off and escape.

For a horror movie it isn't really all that scary. It tries for the usual tropes with jumpscares but it mainly intends to use the activities of the family and the gore to make you more disturbed than scared and it does work pretty well. Only one scene made me jump and I'll admit that it was pretty effective, if a little nonsensical. I won't say due to spoilers but if you watched it you'll know what I mean.

Overall I was surprised with just how much I enjoyed this movie as I wasn't expecting to like it at all especially with how disappointing I found the 2003 effort. Why the hell has this only got 12% on rotten tomatoes? I think it's definitely worth a watch for a spooky night in, and if you're a horror fan or a fan of this series, you owe to yourself to check it out. I feel like opinions will definitely differ, but for myself, I'm a fan.