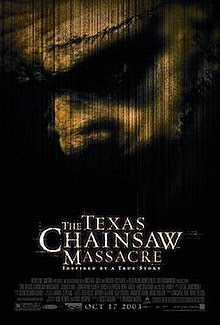 So after the experience that was the original movie, I wanted to continue writing about other movies in the series and couldn't decide between Part 2 or the remake. I decided to plop for the remake to see how it compared to the original.

Plus I haven't actually watched it since I was a young teenager and I'd heard a few people saying that it was actually pretty good and one of the better horror remakes out. So does it hold up 15 years after release? Let's find out.

So the movie starts off in a similar fashion to the original with five friends on a road trip except this time there's no one in a wheelchair and instead of visiting an old homestead, they're on their way to a Lynyrd Skynyrd concert.

They also make the unfortunate decision of picking up a hitchhiker except this time it isn't some creepy weirdo. Instead it's a teenage girl who looks like she's been through hell. She promptly decides to end her own life to really start the story.

This leads the group to try and find a local sheriff to take care of the body so they can be on their way. And this is where the fun begins. They've found that they've ended up in a backwards part of the country where nothing is as it should be. Eventually they find the Hewitt residence (changed from the Sawyer's in the original) where the sinister Leatherface awaits.

It also turns out that the sheriff is very corrupted and weirdly enough is the best part of the film and completely steals the show from everyone else. He's played by R. Lee Ermey of Full Metal Jacket fame and you can just tell that he is having a blast playing this character. He's just so demented and terrifying in his own way to the point where I really want to see him get his own movie. 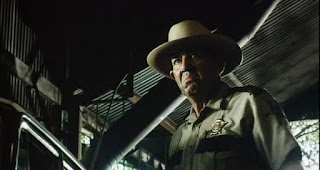 I actually think I prefer the Leatherface in this movie to the original. He's just a hulking figure that you can't escape from and there's no whimpering from him like the original. This is just a creature that aims to kill you and doesn't mind rubbing salt in the wound (literally).

This movie definitely does have a lot more gore than the original but it's not to the point of it being excessive and I think they used just enough to get their point across. And it's only really one or two characters that have the gory scenes so it's not that bad.

The movie is a bit slow to start and I feel like it's designed like that to give you a chance to get to know the characters and get you emotionally attached. The only problem with that is that the characters aren't really interesting at all. The only memorable ones are Jessica Biel as Erin as she is the main character in the group, and Morgan, played by Jonathan Tucker, mainly because he's a pain in the ass and doesn't shut up.

To be honest outside of any of the scenes involving Leatherface and the sheriff, I didn't find too much of this interesting. It was filled with the usual 2000s horror cliches you would expect like cheap jumpscares and the ending was very anti-climatic for everything that had came before.

It just can't match up with the disturbing realism of the original and just comes across as an average horror movie. I mean I didn't even find any of it scary and none of it really stuck with me afterwards outside a couple of gory scenes.

They didn't even do a dinner scene! How can you do a remake without even trying the most disturbing part of the original story? The worst part is that they even tease it and then just do not deliver at all. I mean I can't really knock the movie for it but as a horror fan that was pretty disappointing.

Still, all in all I'd say this is a decent enough slasher and isn't too bad. Just by the numbers outside of a few shining lights.