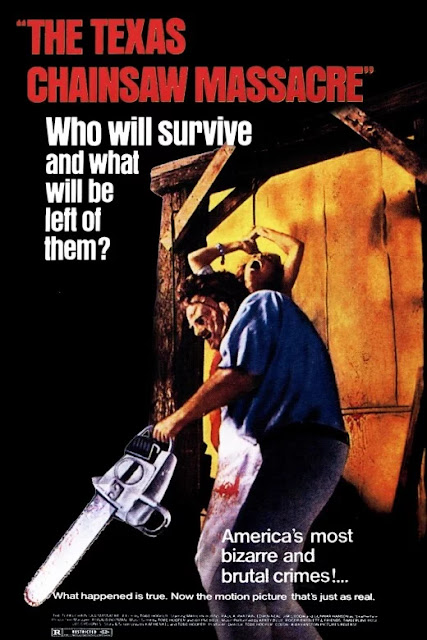 After the crapfest that was Leatherface, I really wanted to go back and check out some of the original movies to remind myself of why it has such a legacy and why some of them are still talked about today.

I haven't actually watched the original since I was in high school so I definitely needed a refresher. I don't remember being scared by it but it did disturb me. I figured now that I'm older I would be able to handle it a little better. Was I right? Does this classic still have an impact? Let's take a look.

There may be some slight spoilers but it's a 44 year old movie so I think we're good. For streaming the movie you can find it free on Shudder (highly recommended streaming service for horror fans).

So the movie follows five friends on their way to visit an old homestead when they end up sidetracked due to a lack of gas for their minivan and end up at the mercy of a very screwed up family.

This film just has a really unsettling feeling to it and that never goes away during its full runtime. It even starts off this way in its very first shot where the camera slowly pulls away from a rotting corpse that has recently been dug up from a grave while we hear a radio broadcast in the background giving a warning on graverobbers. While this plot thread doesn't really appear again, it was the perfect way to start and make the audience feel as uneasy as possible.

At one point, the gang picks up a hitchhiker and why they didn't throw him out after seeing how clearly insane he was after cutting his own hand with a pocketknife, I'll never know. I don't know if the guy playing the hitchhiker was an actor or just a crazy redneck the studio picked up because he was so convincing in what he was doing, from his twitchy mannerisms to the clear glee in his voice when talking about slaughtering animals. Thankfully it wasn't the last time we see him.

Eventually the minivan runs out of gas but they're able to make it to their destination. Two of the group decide to try to find some gas at a farm not far from the house and that's where the fun really begins. Without any warning one of them enters the house and encounters our old friend Leatherface for the first time in a shocking moment and what must have been a pretty effective jumpscare at the time.

There's no finesse in the way Leatherface handles his victims. He isn't like Freddy Krueger or Michael Myers, stalking his victims slowly while trying for a memorable kill. He will simply hit you in the head with a hammer until you stop moving or grab you with the intent to hang you on a chain like a piece of meat still breathing. He won't slowly walk towards you while you try to run away, he will chase you non-stop while wielding his infamous chainsaw and nothing will stop him. It's easy to see why he became such an icon after this.

Probably the most memorable part of the movie is the dinner scene which is just insanely uncomfortable as you almost feel like you're in the room with them. I won't spoil it for anyone that hasn't seen it but you won't look at a family dinner the same again. It's like watching a car crash, you want to look away but you just can't and need to see what happens next.

For a movie with 'Massacre' in the name, there really isn't that much gore here. Don't get me wrong it has its moments, but this movie did not need it at all. This movie aims to stick with you long after it finishes and it definitely succeeds at that. Depending on your squeamishness this movie may even make you sick and I totally love it for that reason.

If you're a horror fan and haven't seen this, you're doing yourself a disservice and need to see it immediately. Even if you have, stick it on again and relive it one more time if you dare. Even if you're not into horror, give it a try one night and who knows, maybe you'll be converted. Either that or you'll be put off for good.