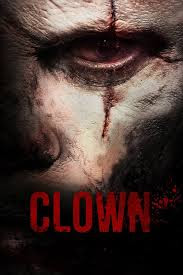 So I was browsing Amazon Prime Video the other day looking for something new to watch when I came across this little hidden gem. I recognised it from the movie synopsis as a viral trailer from a couple of years ago when that weird killer clown phase was taking over the world. It always interested me but I never got a chance to watch it until now.

Of course nowadays whenever anyone is going to think of a killer clown they're going to go straight to Pennywise from IT as he's quite clearly stolen the spotlight from the rest of the group. Not that there's really that many. So does this one do enough to stand out for all you coulrophobics (totally didn't google that) or is it just a pretender? Let's find out.

As usual, no spoilers and if this sounds like something you fancy, you can find it on Prime Video as stated above (not advertising, I just want to find the most accessible ways for people to watch)

First off I quite surprised to see that Eli Roth was a producer for this. I mean he isn't the biggest name and hasn't made that many movies I liked (I found Cabin Fever overrated) but he's definitely recognisable.

The movie follows Kent McCoy, a realtor with a loving wife and son. It doesn't waste any time in starting off as Kent's son, Jack, has a birthday party but unfortunately, the clown that they booked has cancelled. Kent happens to find a clown outfit in a house he's working in and proceeds to save the day. Or so it would seem.

The next day Kent finds that the suit isn't willing to come off (think the black suit from Spider-Man) as he finds that the white make up doesn't stay off for long, he can't pull the red nose off his face, and the suit is so tough that it can break an electric saw quite easily.

Through some research of his own he finds that the suit has an evil history and he needs to try everything to take it off before it's too late.

I have to give the movie credit for making an almost ridiculous premise quite interesting with a fun backstory and a great performance from lead actor Andy Powers who goes from easy going dad to a man struggling with keeping his sanity in the reality of his situation. The only actor I didn't like was the little boy that plays Jack as there's a few times when he should definitely be scared and fearing for his life but his facial expressions just make it look like he doesn't give a shit. 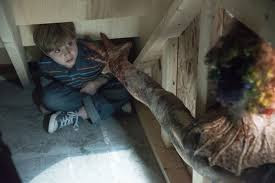 I love the use of practical effects here too. Horror movies should always try for it unless absolutely necessary in my opinion. There isn't one bit of CGI here and it's all the better for it. The creature design as well is splendid and is something that will stick with you in your nightmares especially if your hate clowns.

I've seen a few comments about the movie saying that it's too slow to get to the good stuff, but that actually works here as it just builds and builds as Kent slowly loses his mind and starts acting out of the ordinary. My only real drawbacks are that it is a bit overlong for what it's going for and a couple of scenes towards the end didn't really go anywhere.

I'd also say that the ending is slightly anti-climatic for all the buildup but it wasn't bad and didn't ruin the movie.

If you're not comfortable with violence towards kids in movies then this definitely isn't for you as this does turn into a gorefest at times and can be a total gross out at times. Even a scene where Kent tries to pull off his rubber nose is one that'll have you covering your eyes. I was even getting phantom pains on my own nose. Some scenes in this make IT seem like a Scooby Doo movie in comparison.

Overall I'd recommend this if you're a fan of horror or want to face your fear of clowns as I had fun with this. I'm not sure why there's so many negative reviews as it's an original story with a crazy premise. It's definitely one I'd watch again and would make for good Halloween viewing. It has it's issues of course, but nothing to really drag it down.

Send in the clowns.