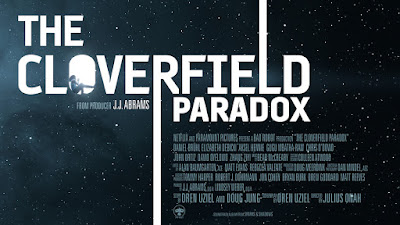 Well this one kind of came out of nowhere didn't it? I was just sitting in work Monday morning when my friend casually hits out with "Hey there's a new Cloverfield movie out on Netflix". Of course I'm immediately checking my phone to make sure that this isn't bullshit. Turned out not to be the case and now we have one of the more intriguing releases on Netflix in recent times. Does the actual movie live up to the hype? Let's take a look.

I am a fan of the other Cloverfield movies. The first one I believe is one of the better movies included in the found footage genre that could be disturbing at times, and 10 Cloverfield Lane was a great, claustrophobic thriller that also kind of came out of nowhere and is so good it can be enjoyed even if you don't care about the whole Cloverfield thing.

If you're coming into this thinking it might be a connection to the other movies, you're gonna be disappointed. It does make clear that it is part of the same universe as the other movies but leaves more answers than questions by the end. I'm getting a bit ahead of myself though so let's start from the beginning.

The movie follows a team on a space station that is basically a giant particle accelerator as they attempt to create an endless energy source for Earth, due to the planet being down to it's last few bits of energy, almost causing wars between nations. This was almost more interesting as every crew member on the station is from a different nation, so it does seem like the potential wars on Earth could affect their relationships, but it's only really brought up once.

After testing the particle beam, they find that Earth has disappeared and they need to find a way back. This also seems to mess around with their reality as shit hits the fan and weird occurrences start to happen which I won't go too deep into.

First off when it does get to this point in the movie, it does start to feel a little similar to other isolation in space movies such as Event Horizon, Alien, and even some episodes of Doctor Who. Kind of appropriate since the main character 'Hamilton' is played by Gugu Mbatha-Raw who also appeared on that show a few times. 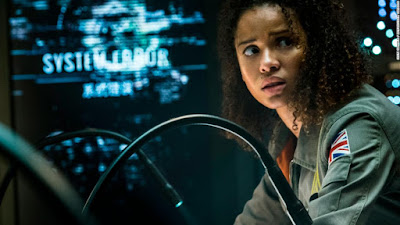 Speaking of Hamilton, she's the only character here that gets any sort of backstory with everyone else just kind of being there, and it makes it hard to care when anything happens to them. You're really only behind Hamilton because she's the only one we've gotten to know. The next best developed character is her husband Michael (Roger Davies) and even then he only gets this subplot to show what's happening on Earth while the space station has disappeared and it kind of distracts from the movie as the more interesting plot points are happening elsewhere. He's only really there to link this to the first movie and didn't feel that necessary.

Don't get me wrong the performances are all fine here and everyone works as well as they can with the material they're given. If you enjoyed Chris O'Dowd in The IT Crowd, then you'll definitely enjoy him here.

The movie is pretty intriguing all the way through, even if the payoff is slightly disappointing, but it's central mystery will keep you interested. The only issue with this is that there isn't much replay value. I do enjoy watching movies over and over again, but I don't think this is one I'll be checking out again anytime soon. While it is intriguing it can be a little slow and can drag at certain points.

I do wish they had done a little more with the distorted reality as it feels like they could have been very creative here and done a bit more but it just feels like they weren't trying too hard on the ideas.

Still it is a decent sci-fi movie and I'd say check it out if you're into the Cloverfield franchise to get your own thoughts on it. I still have no real idea on how their connecting everything, but maybe some of you will. Or maybe we just need to wait on the next one.