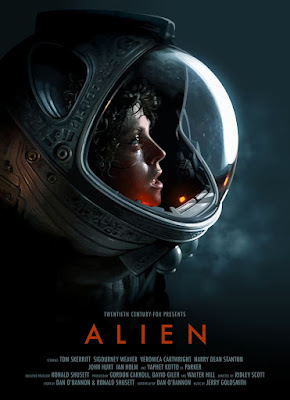 So my current plan is to review the entire Alien franchise from beginning to end in order of release date which is why Prometheus will have to wait. I'm a big fan of this series so this should be a lot of fun.

Will I eventually do the Alien vs Predator movies? We'll see how I get on with these six movies first.

As a sidenote, I'm watching the original theatrical versions rather than the directors cut and I'll be doing that for each one. Also while I normally go with spoiler free reviews, this time every review will include spoilers as this is quite an old series, even if Alien Covenant is pretty recent.

This is kind of a tricky one as you can probably guess my opinion on this one. I mean it's freaking Alien. It's one of the greatest sci-fi movies ever made and has been this way for almost 40 years. If you haven't seen it, what the hell are you doing reading this? Go watch it and come back and I'll explain why it's so great.

Let's start with the story.

The mining ship known as the Nostromo is on it's way home when it intercepts what seems to be an SOS message from a nearby planet that they're now contracted to investigate. All seems normal while checking out the seemingly abandoned ship from which the message originated, until Kane (John Hurt) finds some dormant egg-like objects and then the shit hits the fan. A murderous Alien creature ends up emerging and picks off the crew of the Nostromo one by one.

One thing I really enjoyed about the movie is the aesthetic. It feels like the future while also retaining some of the past to give the ship and the characters a gritty feel to them, something that director Ridley Scott would go back to when making Blade Runner years later. This isn't Star Wars as even the technology used looks exactly like the same kind you would get in the 70s, and yet somehow it still comes off as timeless. I love it.

Speaking of the characters, pretty much all of them are terrific. They all have their own personalities and don't just feel like a makeshift buffet for the monster to eat at it's leisure. Everyone here feels important and any deaths that occur feel like they matter and feel like a gut punch at times. That is except for the character of Lambert. She's not terrible but she does nothing but scream and shout the whole time and I didn't really care for her. Thankfully she's not focused on all that much.

There are a couple of standouts, as I've always loved Ian Holm as science officer Ash. Of course he turns out to have the big twist towards the end when he's revealed to be a synthetic (robot). Watching this over again, you can see his little ticks that hint towards his true identity like the way he speaks to everyone and it's just some terrific acting and directing. 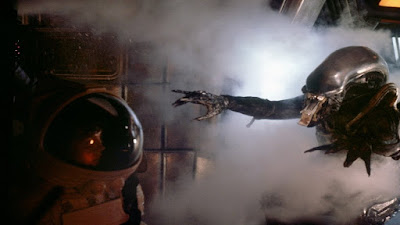 Of course you can't mention Alien without mentioning Sigourney Weaver as Ripley. While she wasn't quite the badass we would come to know and love later on, she's still great here and feels more like a survivalist more than anything. She's definitely the smartest of the group too as she actually tries to follow protocol when Kane is attacked by the face-hugger so that the rest of the ship isn't infected. If only they'd listened.

You also have the absolute star of the show in our main villain: the Alien, also known as a Xenomorph. This thing is absolutely gorgeous and the design can only be described as perfect. Well it is the perfect organism after all. This thing is freaky looking, with it's strange double mouth and it's acid for blood. While it actually isn't in the movie all that often, it steals the scene whenever it appears and it just feels like this ever-present entity as it could be anywhere at any time.

Being a film from the 70s you would think it couldn't be that scary but oh you would be wrong my friend. This film knows how to disturb as well as shock. While it does have a couple of cheap jumpscares (that fucking cat Jones comes to mind) some jumpscares are masterful, like the Alien attacking Captain Dallas in the air vents, only revealing itself when the tension and dread is at it's maximum level. And I can't have been the only one that covered my eyes when the crew was searching for the missing face-hugger. That shit freaked me out.

The famous chestburst scene is still fantastic and one of my favourite movie scenes. Knowing that the crew had no idea what was happening really adds to it and makes it seem that much more real and visceral. It's still shocking to watch and I absolutely love it.

The last act of the film is a total adrenaline rush, as Ripley, now last survivor, has to contend with a self-destructing ship as well as the bloodthirsty Xenomorph to past so she can get on the escape shuttle. Even when she gets there and makes her escape, it turns out the Xeno is still on board as she has to contend with it one last time.

Needless to say, I adore this film and to me it's practically perfect and is only really succeeded by it's sequel but that's a story for another review coming soon. I have only one word for this: masterpiece. Even if you've seen it already, go ahead and pop it in again for another watch. You won't regret it.