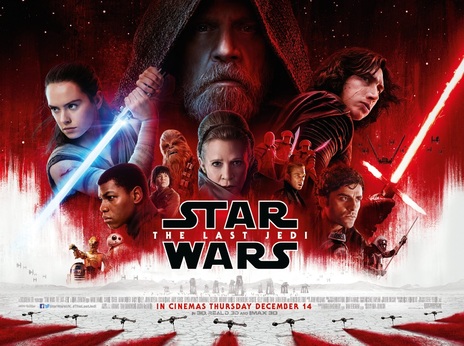 This is gonna be a hard one. I always like to keep my reviews spoiler free and this time I feel like I can't talk about anything without it being deemed as such. Still, I'll try my best.

I did actually go to see the midnight opening on Wednesday night for this as part of a double bill which started off with The Force Awakens (6th time seeing it in the cinema) and I was planning on reviewing this the very next day. After seeing it the first time, I wasn't too sure what to make of it and I decided to wait until I'd seen it again before I gave my thoughts on it.

Well this morning at 10am, I got to see it a second time and I feel like I now have my thoughts firmly set. So how was it and how did it compare to the rest of the legendary saga? Let's take a look.

The movie kicks off just about where Force Awakens ended with a few new plot threads beginning. After learning the location of the Resistance base, the First Order is hot on their tails in their plans to destroy the entire fleet and put an end to their crusade.
Rey meets up with Luke Skywalker to try and talk him into coming back home to help in the fight against Kylo Ren and Supreme Leader Snoke.
Finn wakes up after healing from his injuries at the end of the last episode and joins up with new character Rose on a quest to help the Resistance defend the fleet from attack.

Aside from that there's not much else regarding plot details I can go into without it being considered a spoiler. I really need to start doing spoiler reviews at some point to make this easier.

So the biggest part that people may have been looking forward to would be Mark Hamill reprising his role as Luke after giving us a massive cliffhanger in Force Awakens. I know people didn't think much of Mark's performance in the original trilogy, but here he really gives it his all and puts on his best performance yet as seamlessly manages to act like the old Luke we know while also looking like he's been through a ton of shit.

Carrie Fisher returns as General Leia in what will sadly be her last performance in a film due to her tragic passing last year. As expected she is awesome here, and while she doesn't appear too many times, it's hard not to feel a bit emotional when she does appear especially with one scene in particular I won't go into (damn spoilers).

Of course we have our new characters such as Kylo, Rey and Finn back to mixed results. Finn didn't do as much for me here as while he is still a good character, there didn't seem to be any kind of change from the last movie. In the opposite case, Rey and Kylo are definitely stand outs here. Daisy Ridley feels way more confident in her role as Rey and she does feel like she has evolved over the two movies. 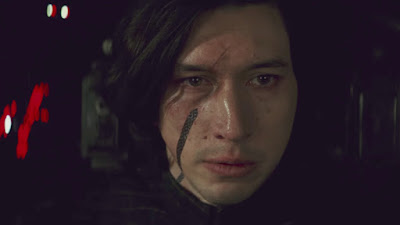 Adam Driver as Kylo Ren may be my favourite though. A few people weren't happy about the portrayal of the character in Force Awakens as he came across as more of a whiny teenager than an imposing figure like Darth Vader. I myself loved this as it was a bit different from other villains especially given his family past which is explored further here. He really comes into his own here and manages to become an even more complex villain while actually coming across as a very threatening figure.

In terms of the overall story, I loved it. The First Order seemed like such an oppressive force for the first time, and didn't need a death star copy to do that. This time you really get a feel for how both sides work and how their military minds think.

This does end up being one of the darker Star Wars movies and it doesn't come across as forced at all which I was worried it would be. The story goes in places you don't expect and there are great surprises and revelations throughout.

While Force Awakens did at times feel like it was a copy of A New Hope, Last Jedi feels like it's own film with only a copy of scenes that felt similar to the original trilogy and they came across as more homages rather than copies.

The only small complaint I have is that the story arc with Finn and Rose is a bit out of left field and does slightly affect the pacing of the first act and I really feel that this could have been trimmed way down. On second watch it wasn't too bad and it does only take up about 20 minutes of the overall film so it didn't really do any damage.

There's so much I love here as it's such a different Star Wars movie than what you would expect which may be why the audience ratings on Rotten Tomatoes may be so low as it isn't the movie you expect to see and it may even piss off a few fans with the way it messes with the lore of the force. Hell I wasn't even sure I liked it on first viewing, but I went in with way too much hype which is why the second viewing was necessary.

This is how a blockbuster movie should be done and I do plan on seeing this a few more times before it leaves the cinema, and I have a feeling it will become one of my all time favourites quite quickly. I'd even currently rank it as my second favourite Star Wars movie I enjoyed it that much.

Full of action, emotion, a compelling story and some of the best visuals and music you'll ever hear in a film, this is must see viewing. Check this one out immediately and give it a chance.