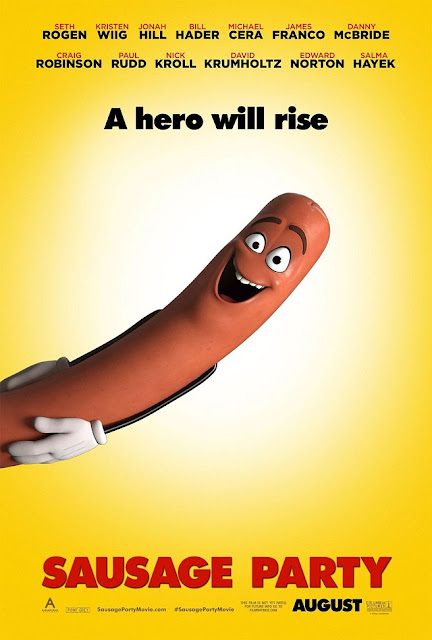 What the hell did I just witness?

I have a feeling that's what most people will be saying once they leave the theatre after this one. I'd heard that the climax was pretty insane and those people were not lying.
I am getting ahead of myself though so let's start at the beginning.

No spoilers by the way.

The movie stars Seth Rogen as Frank the hot dog, and Kristen Wiig and as Brenda the bun. The story follows Frank as he tries to convince the whole Shopwell supermarket that the outside world is not the heaven they believe it to be, as every bit of food that walks out the front doors ends up dead or worse (as noted by a discarded condom).

First off the animation is fantastic and easily looks like something Dreamworks would come up with and even a hint of Pixar. It's strong throughout and I have no issues regarding it at all. We even get some hand drawn animations at one point.

I'll admit it is kind of difficult reviewing a comedy movie as it only ever really comes down to is it funny or not. The quick answer for this one would be yes. Overall it was a very funny movie and had no moments of boredom or humour.

Of course you will find SO many food puns and jokes, some of which land and some just sit there awkwardly. There is one about Meatloaf that did have me giggling and I'm sure you can guess it.

The comedy won't be for everyone though. If you've seen any other Seth Rogen comedy you'll know what to expect, a ton of swearing, sex, and drug jokes. If you didn't like that before, this movie won't change your mind.

The movie was actually surprisingly deep throughout and has a commentary on the concept of religion and even a good message of respecting everyone's beliefs, no matter what you believe to be stone cold fact. It also shows that you shouldn't let your beliefs hold you back from doing what you want in life, as Brenda is constantly battling with her emotions as she wants to have a sexual relationship with Frank but feels that the Gods will be angered by her actions.

You also have a lesbian taco (played by Selma Hayek) who wants to give into her urges of being with another female but again does not want the Gods to be angered with her "sins".
The story throughout is pretty entertaining and it was entertaining to see how the foods would fare against the Gods known as humans. It really made me feel bad about eating my hot dog before the movie.

I know this wasn't a long review but that's all I have to say about it and would recommend it for anyone that enjoys a good, dirty comedy. It's totally worth watching for the last twenty minutes alone. Plus it is something different and you won't see many animated features like this.

Be warned though, you're probably better off seeing this alone because after seeing a particularly raunchy part of the movie, you'll never be able to look the person you came with in the eye again.