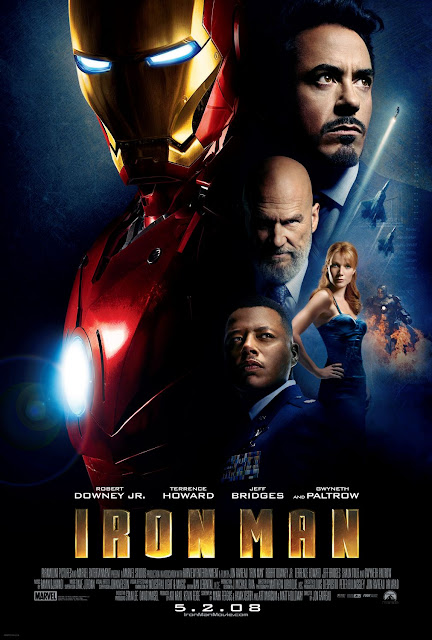 So this will now be the first of my comic book movie reviews (not counting Deadpool) as I'm mainly going to focus on the MCU, DC Movies, all other Marvel Movies not in the MCU and some others like Watchmen and Hellboy. So let's kick it off with the first official movie of the MCU: Iron Man.

Actually I'm not sure if this does count as the first as Ang Lee's Hulk technically is the first one as that story continues into The Incredible Hulk (kind of I guess) but I think I'll be doing that one next so that I can have both Hulk movies finished. Anyway onto the review.

WARNING: There will be spoilers ahead.

I have to admit when I first saw this movie back in 2009 on DVD, I wasn't that enamoured with it. I enjoyed it enough, but at the time it completely flew under my radar as I was in love with The Dark Knight at that point and there was no other superhero film for me and every other one felt inadequate in comparison.

I now realise that I was a dumb kid, and after watching this again in a clearer light, I can admit that it's bloody awesome. I didn't think it would hold up after we've had classics like Civil War and Avengers but it's definitely still one of the highlights of the entire MCU.

There was a lot if weight put on the film's shoulders as it was the one that had to start off the MCU with a bang and have everyone looking forward to future instalments. It basically had the same job that Batman vs Superman had this year except that this one was actually successful.

The story follows millionaire, playboy, philanthropist and the owner of the weapon-making Stark Industries, Tony Stark as he is demonstrating some powerful new missiles for the army when a terrorist group ambushes the group and kidnaps Tony.

Tony is put in a room with another prisoner known as Yenson and they are tasked with building another powerful missile for the terrorists. Of course Tony says to hell with that and builds the first, bulky Iron Man suit to escape.

Unfortunately Yenson doesn't make it as he sacrifices himself to give Tony more time. I loved the first part of the movie here as the action begins straight away and keeps the tension going throughout as you keep worrying that the terrorists will notice what Tony is up to and put a stop to it. There's also some torture scenes which was surprisingly dark for this kind of movie.

It's Yenson's death that really marks Tony's change in character as he completely stops Stark Industries from building weapons and looks to greener pastures for the company. Of course this doesn't make him popular to the rest of the world or to his board of directors, but he is doing the right thing. 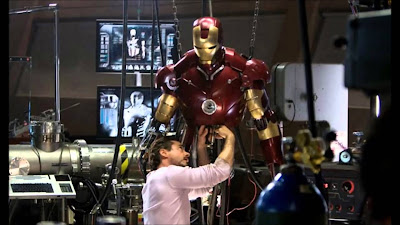 I won't go too in depth to the story as from here as it goes to Tony building the proper Iron Man suit that we all know and love, while his former friend Obediah tries to take him down. It does sound pretty basic but it completely works, even if the same villain aspect would get tiresome in later movies (looking at you Ant Man).

Let's have a look at the actors. Needless to say, Downey Jr was just perfect as Tony Stark. This role completely gave him a career resurgence and for good reason. He does quip and make a lot of jokes and just about all of them land. He can hit the serious moments as well, as we would also see in later movies. I honestly can't see anyone else playing this role. Knocked it out of the park.

Gwenyth Paltrow was great as Pepper and has good chemistry with Downey Jr. She just acts as his assistant most of the time, but with her performance you can see that there's some deeper feelings there.

Jeff Bridges was a good, asshole villain that could act like your everyday sleazy business man, but later showed to be something a bit more evil.

You also have Terence Howard as Stark's best friend Rhodes. He was fine in the role, but this was his only appearance as he would be swapped for Don Cheadle in the sequel. I do actually prefer Don as Rhodes so I'm fine with that.

Everything in this movie hit and I really have no issues with it aside from the climax where we get the typical 'villain making a speech to the hero before killing him and that then leads to his downfall'. I really get sick of that in movies.

But still, the action was incredible, the comedy hit and even the plot felt refreshing as this one didn't have the threat of a city or the world being at stake. It was a personal story through and through. Even people that don't enjoy these kinds of movies can find something that they like.

Overall this is a fantastic superhero movie and still is one of the very best around. A perfect start to the MCU and it would be a while before it would be topped. I think this rating is earned.