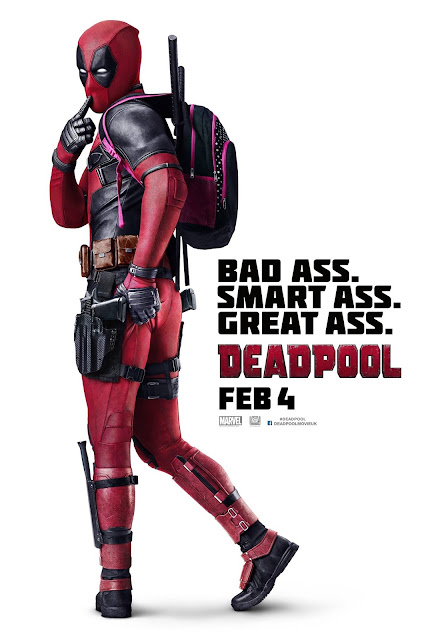 Can I just quickly mention that I have the great soundtrack of this movie on in the background and listening to 'Angel of the Morning' again is bringing a huge smile to my face.

Deadpool is a Marvel (not studios) movie featuring who else but the one and only Deadpool. The basic plot of the movie is his revenge against those that gave him his amazing powers and fuck-ugly face.

Ryan Reynolds is in the starring role and in my opinion was the perfect choice for the part. I honestly cannot see anyone else in the role and I'm glad the casting crew didn't get scared after his appearance in X-Men Origins: Wolverine, which is a movie I'll get to another time.

Needless to say, this movie is an apology from Fox for that disastrous move, and believe me when I say, it was totally worth the wait.

This movie is just fantastic, and for Deadpool fans, it's pretty much everything you wanted it to be. I would say about 90% of all the jokes land (which is A LOT, believe me) and even people who may not get the various references to other movies the Marvel Universe and just the movie world in general will still find this movie funny as hell. The opening credits alone are golden.

The story isn't too much to write home about, but no one should really care about that in a movie like this. The story isn't terrible at all and it does actually feel very refreshing since just about every superhero movie since the first Avengers has been about the destruction of Earth in some way. Here it's just a personal revenge story.

I have to give credit to the pacing as well as it uses the old trick of showing events in the past mixing with current events, just like Man of Steel did except way better. It's a great move and it gives you a break at the perfect time from the current action and the origin story of Deadpool. I never found myself bored during the entire thing and I'm sure I'll laugh my ass off on a second viewing.

The supporting parts are great as Colossus works great as the guy trying to get Mr Pool on the side of good and Negasonic Teenage Warhead (best mutant name ever) who is the butt of most of Deadpool's jokes.

TJ Miller does a great job of being Weasel, Deadpool's only real friend. I also enjoyed Morena Baccarin as Deadpool's love interest as she's definitely a departure from most other love interests seeing as she starts the film off as a prostitute.

The only character I felt was flawed was Ed Skrein as Ajax (Francis!) who was just unmemorable as the main villain and felt like he was only there because he can match mutant powers with Deadpool. Still he wasn't bad and did well with the material he was given.

I'm trying so hard not to spoil anything because this is a movie you should see without knowing too much going in. I had a blast with Deadpool and I know I will again once I see it again in cinema and when it comes out on Blu Ray. Without a doubt, a superhero classic and one of the funniest movies I've ever seen.

I think it's safe to say that this was my favourite Marvel experience since the first Avengers.

Oh yeah, and remember to stay afterwards for a great end credit scene.

Anyone else craving a chimichanga right now?
Posted by rossd971 at 03:45