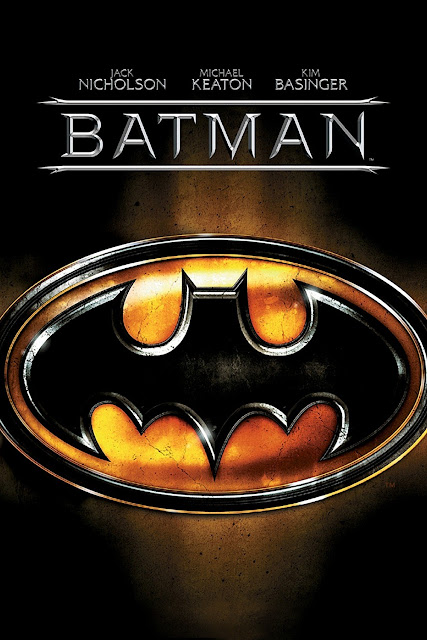 Some minor spoilers ahead.

Batman (1989) is, of course, a superhero movie directed by the always gothic Tim Burton. The film stars Michael Keaton as Bruce Wayne, Jack Nicholson as The Joker, and Kim Basinger as Vicki Vale. There are a few supporting roles but no one really stands out like the main cast members. Except maybe for Billy Dee Williams as Harvey Dent, mostly because it's fascinating to think of what could have been if he'd been given the chance to play Two-Face.

In this universe, Batman is still only a legend in the city of Gotham and still in the early years of vigilantism. The police are denying his existence to the general public, while the criminals of the streets are in fear of him.

This is shown straight away after the first scene as a mugging takes place in an alleyway (very reminiscent of the way Bruce's parents met their demise). One of the two thugs involved in the crime shares rumours of the mysterious Batman and is visibly afraid. He should be as Batman descends behind them and sends them packing to the nearest hospital. This is a great opening sequence which I think may have been used as a source of inspiration for the excellent Batman: Animated Series a few years later as the opening titles do feel similar to this first scene.

Speaking of The Animated Series, you may notice that score of the movie is same as the score used for the cartoon. It's no wonder they decided to re-use the music as composer Danny Elfman does an excellent job of bringing the world of Gotham alive and the theme will become lodged in your head for a while afterwards.

Director Tim Burton did have his work cut out for him, as mainstream audiences who may never have read a Batman comic in their life would only know the Dark Knight from the show in the 60s featuring Adam West. Burton had to bring out the darker side of Batman in a way that wouldn't feel forced and he does it very well. He does try to mix some of the more camp and comical tones of early Batman with the newer, edgier side which can become a bit messy at times, but for the most part it works quite well.

Michael Keaton works well as Bruce Wayne which a lot of people would have found surprising at the time as he is well known for comedic roles and there was an initial backlash to his casting. I will admit that the Batman character didn't do much for me here and didn't seem too intimidating after the opening sequence. He wasn't bad and easily one of the better Batmen we've seen on screen. I definitely preferred him as Bruce. As Bruce he showed some social awkwardness to be expected from some that spends all night chasing bad guys, and could look clever and in control in a moments notice when it came time for Batman to take charge.

Kim Basinger was fine as reporter Vicki Vale, but needed to be saved a bit too often for my liking. She was great up until she started dating Bruce and then lost a bit of her character to become the typical damsel in distress.

The real gold here to talk about is Jack Nicholson as The Joker. He starts off as cool gangster Jack Napier before falling into a vat of chemicals that deformed his face and turned him into, arguably, the greatest comic book villain of all time. I feel like this performance has been forgotten somewhat ever since Heath Ledger's legendary take on the character. Nicholson is terrific here and steals every scene he's in. He's unpredictable as you never know if he'll kill you or just laugh right in your face. He shows a very comical side, which is reminiscent of the 1960s show, while also showing a darker, murderous side. I do think his change from typical gangster to psychotic villain is a bit too quick, although I suppose you could say that the old, rusted tools that were used to heal him severed his nerves and drove him insane, in one of the more iconic scenes from the movie where he looks at his deformed face for the first time.

I also loved that they went the more 'Killing Joke' version of The Joker as he was given a proper origin story and even has the iconic outfit from that comic. I feel his performance is now underrated as everyone now prefers Heath Ledger's take on the character. Trust me the movie's worth checking out for Nicholson alone.

There are some plot points that I think are way too ridiculous and coincidental, but I won't mention those as they're pretty big spoilers.

The story is pretty basic when you get down to it as it's the classic hero makes the villain and now the villain has to be stopped before killing innocents. It's the characters that bring that story to life and make for a very entertaining watch that any fan of the Caped Crusader can enjoy.

Overall I thought this was a great movie that brought the darker side of Batman to the silver screen for the first time, and until Christopher Nolan came along this was easily the best of the Batman feature films. I would even say that it could hang with a lot of the Marvel Cinematic Universe movies of today. As it stands it's a movie definitely worth your time and worth buying on Blu-Ray. Also, please just give Jack Nicholson another chance. He's no Ledger but he's still worth a look.